New Publisher, Co-Editor for my Legal Treatise, and how I got started with legal publishing

by Norman Stephan Kinsella on September 27, 2011

As most of my libertarian friends and readers know, I’ve published for a number of years books and articles in the area of political and legal theory. I’ve also engaged over the years in more practical legal writing, from law review articles to authored and edited books (I maintain a separate website, KinsellaLaw.com, for my legal practice). My legal writing has primarily covered intellectual property and patent law, and international law topics. I started writing in both areas–libertarianism and law–at the beginning of my legal career, in the early 1990s.

The way I got into legal publishing may be of some interest to aspiring legal scholars and law students. Some of my early legal writing was based in part on some of the international business law I learned during my LL.M. at University of London–many of these were published in the Russian Oil & Gas Guide and other fora, while I was an associate practicing oil & gas law at Jackson Walker in Houston, at the encouragement of my boss and mentor, Lanier Yeates. (For more on how I ended up in London, see The Start of my Legal Career: Past, Present and Future: Survival Stories of Lawyers.)

These were all co-authored with my friend and colleague Paul E. Comeaux. We put a lot of this together into a more comprehensive law review article, “Reducing Political Risk in Developing Countries: Bilateral Investment Treaties, Stabilization Clauses, and MIGA & OPIC Investment Insurance,” 15 New York Law School Journal of International and Comparative Law 1 (1994). This piece was scholarly yet practical. Shortly after the piece came out, we were approached by Susan DeMaio, a project editor at Oceana Publications, an international law publisher. Susan suggested we turn the article into a book. Paul and I did this, resulting in Protecting Foreign Investment Under International Law: Legal Aspects of Political Risk (Oceana Publications, 1997). Years later, I co-authored International Investment, Political Risk, and Dispute Resolution: A Practitioner’s Guide (Oxford University Press, 2005), a successor volume to the 1997 book. This was published with Oxford which had by then acquired Oceana; my co-author was Noah D. Rubins, an American international arbitration attorney in Paris. (A second edition was published in 2020.)

Shortly after the 1997 book, Paul and I were approached by Oceana to see if we wanted to take over the editorship of one of their multi-volume treatises, Digest of Commercial Laws of the World. Unlike a lot of professors and academics that legal publishers work with, who are often late, we had turned in the manuscript for the 1997 book on time, and were young and had lots of energy and ambition. This led to my co-editorship of other Oceana (later Oxford) treatises, namely World Online Business Law, Online Contract Formation, and Trademark Practice and Forms.

I co-edited the Digest for a number of years with Paul, then later by myself.

This year West/Thomson Reuters purchased these three treatises treatise from Oxford. So now I’ll have yet another publisher. I decided to bow out of World Online Business Law, and to team up with my friend and fellow Austro-libertarian legal scholar Patrick Tinsley, to co-edit Digest. Pat, a lawyer with Avery, Dooley, Post & Avery in Belmont, Massachusetts, and I had co-authored a few law review and other articles previously. I had already gotten a trademark lawyer I know, Terry Tucker, to co-edit the Trademark treatise with me a couple years ago. I was just too busy with other pursuits to be a solo editor any more. 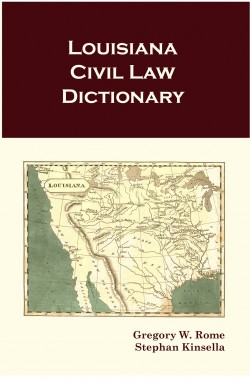 Another recent book also resulted from early legal writing. In 1994 I published the article “A Civil Law to Common Law Dictionary” (as published) in the Louisiana Law Review. A couple years ago another Austro-libertarian legal scholar friend of mine, the young lawyer Gregory Rome, now of Williams and Rome, and I teamed up to expand that article. This resulted in the recently published book Louisiana Civil Law Dictionary (Quid Pro Books, 2011).

Nowadays, of course, legal blogging is a widespread phenomenon, so this is another possible outlet for lawyers who want to write. I did start one of the earlier law blogs (see KinsellaLaw re-launches…), but now tend to blog more on libertarian topics, and publish more conventional articles and books for legal topics.

I’ve enjoyed the money, experience, and contacts I’ve gained from all this. It can also help with client development, and with making yourself stand out at a law firm–the partners know your name if you are a prolific and respected scholar. For law students and young lawyers with an interest in scholarship or publishing, or even teaching, take advantage of publishing opportunities when you can, even–especially–early in your career.

Update: I found some old pix from 1997 of me with my first and then-recently published book, Protecting Foreign Investment Under International Law: Legal Aspects of Political Risk, see below: Update: See also my post Gender-Neutral Language, Reverse Racism, and Law Review Strategies, discussing another legal publishing episode (detailed in  The Enlightened Bar and Re: The Enlightened Bar), which concern an article of mine I submitted to the Texas Bar Journal. It was accepted, but the letter of acceptance informed me it could take up to a year to publish it–unless I was a minority, in which case they could scoot it to the head of the line. I was offended and withdrew it, published it (quicker) in another journal.

Update: Facebook post about how I used to use non-billable accounts at the law firms to get copies of law review articles for research.